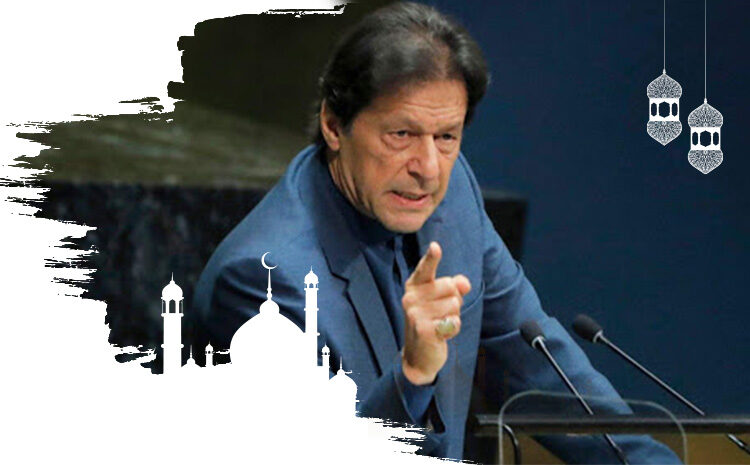 During the just-concluded UN General Assembly on Friday, the Pakistani Prime Minister, Imran Khan talked to the world leaders about some of the concerns they face as a nation and urged the leadership of the UN to assist the smaller and poorer countries, Pakistan inclusive to further ameliorate these concerns. Some of the problems he talked about include Islamophobia, global warming, and how the west has assisted the government elite in their quest to siphon government monies among other things. These are some of the things he spoke about.

There are about 1 billion Muslims on the face of the earth and every day there is the growing concern of islamophobia. Daily, the toll of people who hate the religion of Islam and the Muslims is growing and this is a cause for world concern. After the 9/11 saga, certain world leaders equated terrorism with the religion of Islam and this has caused a global problem. There is the belief in things like Islamic terrorism and radical Islam whereas these things do not exist.

There is only one Islam and it is the one we follow judiciously, the one of Prophet Muhammad. If we begin to give terms and define radical Islam, how will someone in New York differentiate or distinguish between a moderate Muslim and a radical Muslim? This is what we should consider when we use terms like these. This craze is marginalizing Muslim communities in European countries and this is something we do not want because marginalization will lead to radicalization. A lot of the people who end up as terrorists in Syria were from marginalized societies so we need to address this issue.

The Muslim leaders such as myself have not addressed this issue as we have failed to tell the world what the Islam religion is all about. After the 9/11 saga when a lot of people started talking about radical Islam, we failed to correct them and tell them that there is no such thing. In all communities of the world, there are radicals and there are moderates.

There are radical Christians and radical Hindus and the rest of them but we do not call them a sect and blame the entire religion for criminal acts such as terrorism. No religion preaches radicalism as the basis of religion is compassion and justice. It was the fear of being called radicals that led the Muslim community to desperately begin to address themselves as moderates.

One of the reasons Islam was equated with terrorism was the invention of suicide attacks. From the 9/11 bombings, a lot of theories came up, one of which was the fact that they indulged in these bombings because they were promised virgins in heaven. If you consider this theory, you would ask what about the women bombers? Do they also get virgins in heaven? So it was bizarre that everyone concluded and decided to equate these bombings and terrorist actions to the Islam religion.

Before the incident of 9/11, the majority of terrorist actions were by the Tamil Tigers who were Hindus but no one equated terrorism to Hinduism and this was the right thing to do.

In the west, religion is perceived differently and as such, they do not understand how dear it is to some other people. When people in the west ridiculed the Prophet Muhammad or maligned him and the Muslims responded violently, Islam was perceived as an intolerant religion. No one seemed to think that the western culture of freedom of speech could be provocative against religions.

The Prophet Muhammad is the nucleus if you may of the religion of Islam, he is the model of what we all aim to achieve and so if he is ridiculed, you ridicule the very fabric and foundation of our religion and this is something the Muslims cannot take. We ought to live and operate our rights to stop where the other person’s right begins.

The Happenings in Kashmir and Imran Khan address

Pakistan joined the government of the US in the fight against terrorism and when we came into power, we dismantled all the militant organizations that were in existence and tried to mend fences with Afghanistan and even India. India’s plans and agenda after the failed attempt to reconcile became more clear to us when on the 5th of August they violated 11 of the United Nations security council resolutions.

These resolutions leaned to the fact that Kashmir was a disputed territory and as such, they had a right to self-determination. India also went against their constitution which was later amended and added 180, 000 troops making a total number of security forces in Kashmir 900,000. They have also put the 8 million people in Kashmir under curfew.

The prime minister of India is a member of RSS which was pioneered by Adolf Hitler which beliefs in ethnic cleansing and ethnic purity. So there is an inherent hatred for Muslims and Christians alike. This man has laid siege to 8 million people in Kashmir keeping them in confinement. This act can only be interpreted as arrogance and the world has not done anything about it. What he fails to understand is that there will only be a bloodbath when the curfew is lifted as the people will fight back the 900,000 troops present there.

They have been boxed in and denied their rights. Their leaders have been taken out and the state has been completely taken over by the troops. The 1.2 billion Muslims around the world will look upon this and know that these people are only attacked because of the predominance of Muslims in Kashmir.

What do you think will be the reaction of these Muslims? Imagine yourself as one of these Muslims in Kashmir being locked up for 55 days and hearing about the multiple rapes by the Indian soldiers. This is only a provocation and the results will be the people of Kashmir fighting back which of course will not end well.

The Indian government is already setting the scene to put the blame on Pakistan and we can only call on the leadership of the UN to put an end to this madness. The UN was made for times like these and we are here because of that. You guaranteed the people of Kashmir the right to self-determination and this right must not be denied.

Have a look at our Courses